Ask Me About Long Peptide Synthesis

Please click here to get a quote for Long Peptide Service now!

Solid-phase peptide synthesis is the most common method of peptide synthesis today. The C-terminus of the first amino acid is coupled to an activated solid support, such as polystyrene. The support acts as the C-terminal protecting group and provides a rapid method to separate the growing peptide product from the different reaction mixtures during synthesis.

LifeTein routinely uses our proprietary technologies to produce peptides >100 amino acids. The longest peptide we have made to date is 169 amino acids. We promise to provide the HPLC purified peptide with correct molecular weight analyzed by Electrospray ionization (ESI) Mass Spectrometry. The Net Peptide Content (NPC) is not tested by Amino Acid Analysis (AAA). 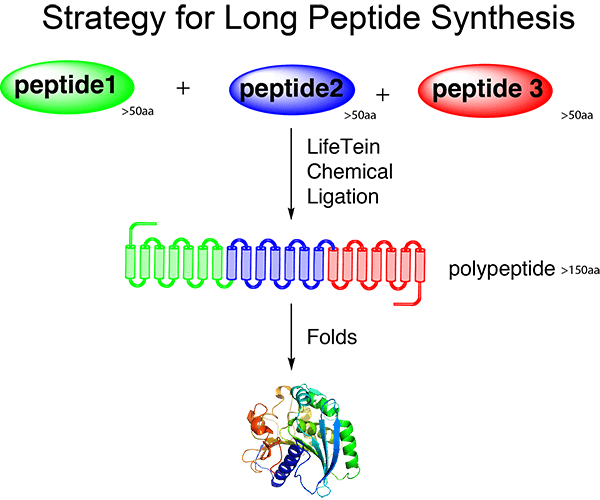 1. A 76-aa BfUbb peptide corresponding to the mature molecule without the signal sequence was synthesized by LifeTein. The synthesized protein has very potent activity against sensitive strains, where as little as 250 ng of the protein resulted in a detectable zone of inhibition. See reference here.

2. NUCLEIC ACID VECTORS AND USES THEREOF: A peptide of 133 amino acids was synthesized by LifeTein. The peptide sequence includes at least one cell penetrating peptide (CPP) domain, one secretion signal sequence, one DNA binding domain, and other SHT protein. We are asked frequently to synthesize relatively large peptides sized 100–200 residues, which is the size of a mean protein domain. We recently synthesized a 169-amino acid peptide. This demonstrates that the synthesis of peptides sized 100–200 amino acids is not beyond the capabilities of our current PeptideSyn technology. This long peptide was synthesized from intermediate fragments that were generated using stepwise SPPS, purified in their unprotected form, and ligated chemically with minimal protection.

A Simple Protocol to Refold Peptides or Small Proteins.

Obtaining peptides sized 100–200 amino acids using chemical synthesis is much faster and cheaper than cloning and overexpressing in Escherichia coli. In addition, the resulting peptide is always correct. Chemical synthesis can be used to incorporate non-genetically encoded structures, such as D-amino acids, into the protein in a completely regular fashion. Synthetic peptides eliminate problems such as poor or no expression, cloning errors, tags like FLAG or 6-His, or the mis-translation of non-preferred codons in prokaryotic hosts. Artificial amino acids that have isosteric side chains can be used to investigate the functional importance of specific residues. A 169-amino-acid peptide (MW 18716.41 Da, 83% purity) was synthesized successfully in 4 weeks. The success of the synthesis depends on the sequence: some 150 amino acid peptides can yield better results than those with 70 residues. Usually, Boc/Bzl protection is optimum for long or difficult sequences and base-sensitive peptides. Cleaving the peptide product from the resin requires strong acids such as TFMSA or HF. During the deprotection and cleavage from the resin, some reactive intermediates can react with vulnerable moieties such as Arg, Asp, or Glu in the peptide. LifeTein's PeptideSyn technology has a revolutionary effect on the synthesis of long peptides by eliminating these issues. A client requested a very hydrophobic 68-amino-acid peptide (85% purity) with FITC modification at the N terminus. The peptide was successfully synthesized in 4 weeks.