Ask Me About Peptide Array and Peptide Library

2. If you have a quote number already, please click here to place a peptide synthesis order now!

The use of peptide libraries and peptide arrays as a research tool in chemistry and biology laboratories has increased significantly in recent years. 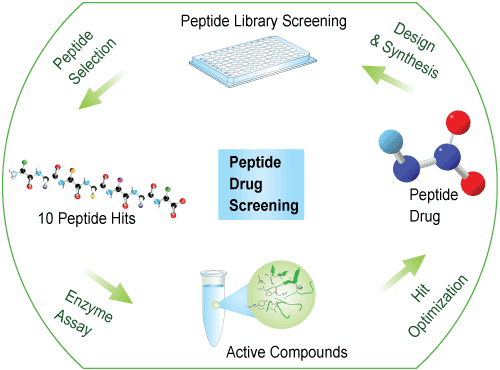 Peptide Spots on TOTD membrane: Peptides are linked with an ether bond via bis-aminopropyl-diethyleneglycol linker to the cellulose. This linker gives flexibility and is very hydrophilic. One MTP-sized sheet (9.5cm x 14.5cm) accommodates 1200 spots. It is recommended for a single use of the arrays. However, multiple uses are possible under the mild conditions after the regeneration of the membrane.

Peptide Spots on commercial membrane: Peptides are linked via polyethyleneglycol linker to the cellulose. The chemical bond and the cellulose itself are almost completely stable. This type is recommended for multiple uses.

Overlapping Peptide Library: Individual peptides can be divided in to several fragments that overlap. The resulting overlapping peptide libraries can then be used for processes including continuous and linear epitope mapping.

Truncation Peptide Library: Peptides can be cleaved systematically into small fragments. The library of truncated peptides could then be used to predict the minimum length amino acid that could be used to achieve optimal epitope activity.

Alanine Peptide Scanning Library: Each amino acid is substituted individually and systematically for alanine. Alanine scanning allows the easy identification of the specific amino acids that are responsible for the conformation, activity, and function of a protein.

Scrambled Peptide Library: These libraries are designed using variations of the original sequence of a peptide. The resulting peptides are used generally as negative controls to show that a specific sequence is critical to the protein function or activity. It is also a random screening tool used to find new leads.

Positional Peptide Library: Selected sites or regions within a peptide sequence are replaced systematically with other amino acids. These libraries facilitate the identification of the positions and regions that are responsible for specific activities or effects.

...pools of 15-mer peptides spanning the amino acid sequence of PAP or PSA and overlapping by 11 amino acids (LifeTein)...

Recent improvements in peptide delivery technologies coupled with data available from the human genome project have facilitated the identification of novel drug targets. This has also led to an increased demand for effective systems to create synthetic peptide libraries.

Synthetic peptide libraries could be used to screen a variety of molecules, such as enzymatic substrates and inhibitors, and cell-binding peptides. Combinatorial techniques, unlike traditional methodologies, allow many molecules to be handled simultaneously. Therefore, combinatorial chemistry is an important tool for discovering novel drug candidates, catalysts, and other related materials.

An important biological application of custom peptide libraries is characterization of the binding events that occur between specific proteins and their peptide ligands. Additional applications include identifying enzyme substrates, and characterizing the ligands that mediate cellular adhesion. For example, fluorescent protease substrates could be designed, placed in a peptide library, and used to screen protease substrates. Peptide libraries can also be used to quantify kinase activity, as well as a variety of detection methods including surface plasmon resonance (SPR), fluorescence, and phosphorimaging.

Peptide libraries can be used to rapidly identify high-affinity ligands when comparing the specificity of interactions among different domains.

Intracellular kinase-mediated signaling requires specific protein complexes, whose assembly is mediated and directed by phosphopeptide binding domains; proteins that bind to these phosphopeptides can be identified using peptide libraries. This allows proteins that bind specifically to phosphorylated peptide library affinity matrices, including pTyr, pSer/pThr-Pro, and pSer/pThr-pSer/pThr, to be identified.

For example, a phosphotyrosyl (pY) peptide library that contains completely random residues at different positions from pY could be screened against biotinylated domains, and the resulting beads bound to high-affinity ligands of the biotinylated domains could be identified using enzyme-linked assays.

Our peptide library program can synthesize peptides of up to 40 amino acids long in individually labeled vials. The minimum order size for each library is 20 peptides. Each peptide undergoes strict quality control to guarantee accuracy.

Indicative peptide library pricing (per peptide) is available for the standard synthesis of peptides up to 10 amino acids. "As synthesized" libraries and purified peptide libraries are both provided at a scale of 1 to 4 mg.